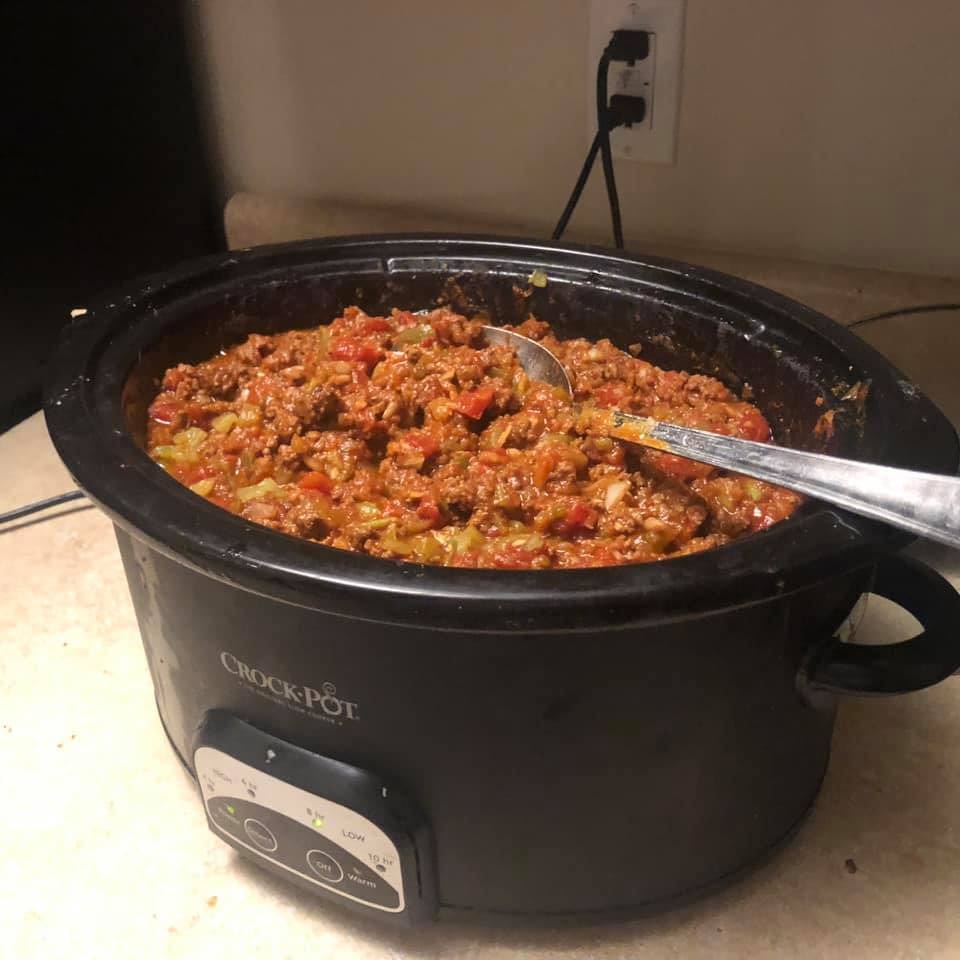 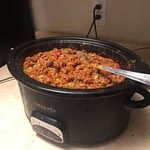 This chili recipe is an emergency recipe. I usually would not use all the canned ingredients if I could help it. So, when hatch green chili is not in season, I’m generally in trouble. I’ve lived all over the country, which allows me to blend many different regional styles of chili to form my own. Most always, my chili is improvised. I do have a few rules. First, at 52 years old, I can damn cook chili without any beans in it. Second, a spiced-up hamburger is not chili. My chili needs to feature chili, not the meat, usually hatch green chili. That said, here is the chili I did tonight. It turned out fantastic!Anyway, I accidentally bought 5 lbs. of hamburger instead of the 3 lbs. I had intended. And for some reason, I didn’t catch the error until I had started browning it. The fact, it was overflowing with my 12’ cast iron skillet should have been a clue. Anyway, my usual recipe was now out of whack, so I just started improvising. Saying I’m going to start improvising is odd as I always improvise when I cook, so this was improvising on top of improvising. Anyway, it’s all in the slow cooker for the next 10 hours. Look over the ingredients list, tell me what you think, how many servings I will get (25?). The goal of this batch is to freeze for my sons to use as frozen dinners. Anyway, I have overused the word “Anyway” in excess of two extra pounds of hamburger. At the first tasting, about an hour into the “slow and low,” I’d say, “The chili had a sweet chunky start with a lingering heat.” But no real kick. That’s when I decided to add the tiger sauce and cayenne pepper! The cayenne sure shored up the front end. My eyes watered from the tasting. The Tiger Sauce will take care of the tail! But, It’ll need a full 10 hours in the crockpot to "slow and low" blend all the tastes.
Prep Time30 mins
Cook Time10 hrs
Portion and Freeze15 mins
Total Time13 hrs 15 mins
Course: Main Course
Cuisine: American
Keyword: Chili, Pre-made Meals, Single Dad Hack, Single Dad Recipes
Servings: 12 Large Servings

Single Dad Hack - Cooking lessons number one, don't start a completely new recipe at 4:45 on a school night. It's 7:35, and the taters just jumped out of the oven. Second, you really only need four potatoes for three men, and six is way too much (actually, now that we're into the meal, we only needed three - will they freeze?). My twice-baked potatoes are loaded with sour cream, cheddar, scallions, bacon bits, mini pepperoni, topped with broccoli (not mine), a side salad, and Strawberry ice cream for dessert. And the third lesson, with six potatoes, you don't really need the broccoli, the side salad, or the strawberry ice cream(finding a way to ditch the broccoli was my plan all along). Top that, Mr. Other Single Dads! A little challenge to get our dad's vibes cooking (pun intended). And the final lesson learned from cooking Twice-Baked Potatoes for the first time on a school night (It was more of an insight than a lesson), I fed my class of 2025 Aggie tonight! AND when he stuffed his 17-year-old mouth with twice-baked potatoes, looking not unlike a ground squirrel stuffed with nuts for burial, he said, "TmhmamTm'ms Rmemamlmy Gmomomd Dmamd!" I understood that perfectly; he loves my cooking! But, more importantly, he's going to hate dorm food! He'll be wantin' a Dad home-cooked meal and will come home just a little more! Ha! That's the best Single Dad Hack you can do. PS. When viewing the photo, ignore cleaning supplies in the background. I am a single Dad, for goodness' sakes! I can't be expected to cook and clean AND put the supplies away (actually, I did that on purpose to raise my Super Dad score)!
Prep Time1 hr 45 mins
Cook Time1 hr 20 mins
Course: Main Course
Cuisine: American
Keyword: Class or 2015 Aggie, Confort Food, Potatoes, Single Dad, Single Dad Hack, Twice-Baked Potatoes
Servings: 8 Men
Calories: 659133kcal
Cost: 20

I posted a few savory pie attempts on social media. When my sister, Marla started mocking me for making savory pies. She chided me with, "what's next, mushroom pie!?" I thought about it for a moment and thought "Hell ya!" A quick Duck Duck Go search showed that there were a few such recipes out there. One or two look a lot like my old mushroom stroganoff recipe that I used to make with an old girlfriend, Kirsten, but without the egg noodles. The pie crust replaces the noodles. So, I scratched my pandemic quarantine whiskers and had an erica moment witch culminating in the birth of my mushroom pie! Now, it has already become a big hit in my family.
Prep Time20 mins
Cook Time25 mins
Cool Down10 mins
Total Time50 mins
Course: Main Course
Cuisine: American
Keyword: Father son, Pie, Savory Pie, Single Dad Recipes
Servings: 8 people
Cost: $15

Crusts: (Use whatever is your favorite pie crust, but remember it's a savory pie)(Who am I kidding? I use premade crusts.)