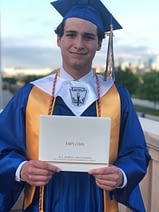 In Light of Emmons’ Graduation yesterday, I’d like to publish a journal entry I found of my mother’s. I dearly wish she could have been there.

8/10/11
Wow! What a day! Emmons flew in from Oregon today as an unaccompanied minor. My

head told me he would be fine – but my heart wouldn’t let me relax. I felt all day like I had forgotten something – some reservation, some technicality something.

I went to yoga this morning and that relieved some tension, but I got 2 phone calls from Mike during class. I normally turn my phone off during class, but today I placed it right beside my mat.

For the rest of the day, I basically, I watched the clock and tried to will it to move faster. Emmons did call from Dallas/Fw and sounded good and happy.

After my shower and another phone call from Mike, we finally went to the airport. Smooth as glass at the airport. Went to security – easy. Sat at the gate. Emmons was the last off the plane and all smiles. The attendant told me he was a “cutie” (like I didn’t know) and that they all had a ball with him.

We ate at kingfish in Indiana and sat outside. Emmons of course got shrimp. The a chocolate mint cone at Zesto’s.“ Then home at last.

Snake in the Grass

“Oh, am I sick! I just can’t keep this up. I think I’m going to puke,” I thought, as my second hour juniors passed forward their essays on Thoreau’s “Civil Disobedience.” Finally, the bell rang to end class, and I dashed from my second floor room to the restroom on the first floor. “I can’t keep racing down here,” I moaned, as I watched the remains of my chili lunch swirl away from me. “I’m going home!”

After I reported to the office, I grabbed my London Fog raincoat, jotted down some hurried notes on a Post-It for the sub, and trudged to my yellow Volkswagen bug. The thought — Yellow Bug — brought burning bile bubbling into my throat.

When I finally got home, I pulled into the gravel driveway, parked the car, opened the door, and dragged myself toward the front door of my house. Then I froze. There in my path coiled a slimy, green snake. To me it looked as big as a boa basking in the warm April sun. But, worst of all, it barred my way to the house. What could I do? Repulsion shivered over my body like a prickly, cold rain, but I had to slay the evil enemy that lay in my way. I raced to the barn to get a sharp hoe but stopped. I couldn’t do that: raise the hoe high in the air, swing it down, and chop through its green slithery neck sending its red blood everywhere. Bile again seared my throat.

Back to the car I dashed. I revved the engine and sped through the yard toward the snake. I’d run it down! Ignoring the deep ruts in the damp earth, I made several passes at my reptilian foe. Suddenly, realized I didn’t know if the snake was dead or not. It could be lurking right outside my car door. What was I to do? Would I step on it if I got out of the car? With a flash of genius, I drove right up to the front stoop of the house, opened the car door, leaped out, and darted inside. Safe at last!

Much later, when my husband arrived home, he spied the furrows in the yard and the Volkswagen with its door ajar. He ran to move the car, but when he cranked the key that I had left in the ignition, the engine ground and barely turned over. Then, just a click. I hadn’t slaughtered the monster snake, but I had butchered the battery.

When the boyz returned home from visiting their mom’s for Christmas, Emmons carried in a large plastic storage box. I looked in the box. It had over a thousand photos from my childhood right up through our divorce. I didn’t know they still existed.

One of the images was a photo probally 20 years old.  I took it after my Mother and Aunt told a story about how they would walked to elemtery school together.

These sisters would walk together to their elementary school somewhere on the south side of Indianapolis. I don’t think they had moved to Southport yet. They lived not so far south but still south of Prospect Street and Fountain Square. The school had a number for a name, something like PS-31 or 41 (my aunt corrected me – Eleanor Skillen School #34). It is over 123 years old. As only siblings can do, they sometimes tortured each other on these walks.

The story goes, Aunt Darlene would walk behind, hanging her arms over my mom’s shoulders, and resting her chin on top of Mom’s head, just like the photo. Except she would weigh down Mom (Donna Emmons LaFollette) so that Mom would practically carry Darlene.

The crux of this anecdote peculiarly notes, mom submitted to this sisterhood shenanigans several times, at least more than once. Finally, my mother realized the physics of the situation, squatted down, then sprang up, ramming her head into her sister’s chin. I’m not sure if an injury occurred or blood flowed, as they’d always started laughing and bantering at that point in the narrative, forgetting to finish.

I took that photo in the front yard of my cousins’ house. Their pose illustrated the event.

I wonder if my failing recollection describes the incident anywhere close to how they told it or if I’m overusing dramatic license? If the latter, I hope Aunt Darlene doesn’t out my nostalgic sentimentality.

When asked to confirm or deny this story, my Aunt,Darlene Emmons Blanford,said – “You nailed it, Mike.”

Walking to and From School

Mom talked about walking to her grandparents, finding the Schomburg’s door unlocked, walking through the house, and finding no one was home. So she headed straight out the backdoor to walk to Prospect Masonic Lodge on Prospect Street.  She would find my great-grandparents cooking in the kitchen!

Donna Emmons LaFollette grew up on a different day.

Mom and Aunt Dart’s elementary school, back in their day.

My writing got called “smarmy”

A good friend of mine, who often suffers my little pieces of prose at my request, called my writing “Smarmy.”

I had to look it up: Here

The school is 123 years old. It does have a new building.

As for smarminess, I never use one noun when you can add three grandiloquent adjectives around an Oxford comma. If God didn’t want smarmy prose, he wouldn’t have created adjectives, damn it!

I know something about you

I know something about you –
I know your stomach growled last night
Because the refrigerator was bare.
I know the frozen dinner you fixed
that Monday night
You ate with Homer Simpson
While cross-legged on the floor

I know something about your –
I know you had a story to tell
And no one was there.
I know you tucked yourself in bed
And Jumped at imagined, lurking dangers.

I know something about you –
I know you let yourself in the door
And thought of excused for not doing math.
I know you were alone.
No on asked, “Sweetie, how was School?”

I know something about you –
I know you’re bruised
And Ache at times.
I know you’ve helped a parent stumble into bed
And hoped this drunk wouldn’t awaken.

I know something about your –
But I don’t know what to do.
I teach you ‘i’ before ‘e’