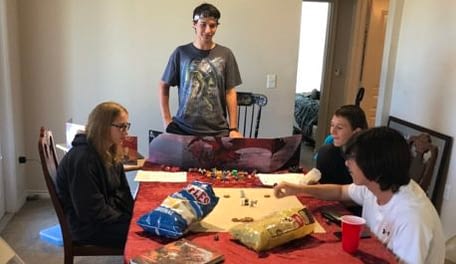 I’m looking for 4 or 5 adults who want to start a regular remote (via teleconferencing) Dungeons & Dragons campaign.
Emmons, my oldest son, has started a virtual Dungeon & Dragons’ campaign with his friends, due to the pandemic quarantine. He is an outstanding DM, even getting offers from the local gaming store to DM on league nights. He surpassed my D&D knowledge years ago. He uses all the D&D 5th Edition material and the official additional material; Xanathar’s Guide to Everything, Volo’s Guide to Monsters, and Mordenkainen’s Tome of Foes. I’ve watched him adjust between combat-focused games and more role-playing and story-focused games depending on the players he is leading, which is a really insightful skill. Emmons has agreed to DM a regular campaign for me and 4 or 5 of my adult friends.
In 2014, just as Wizards of the Coast were starting the publication of the 5th Edition material, I decided as a ploy to get the boyz off the Xbox, I would teach them D&D. The cool thing was the 5th Edition is an attempt to recapture the ethos of the original Advance D&D I played in the ‘70s and early 80s. So, we started playing a much richer version of what I remembered. We played together with me DMing but soon started going to D&D league nights and the boyz quickly outgrew my skill as a DM. Emmons and Elias started hosting games at home with their friends, joined the D&D club at school, and started going to games at friends’ homes. Emmons has gotten to be a very good DM, getting requests and offers from all over. He even considered setting up a website and becoming one of the few DM for hire out there (the teen in him really doesn’t want to do that much work).
Anyway, I realized I haven’t played the game with people from my own generation in 35 years or so. I think it would be fun. So, I asked and he agreed.
Emmons has been using Roll20.net for a virtual tabletop for his remote game with friends. They have just been using that same site for teleconferencing, but I have read reviews that the audio and video is iffy. So, we might want to use another teleconferencing platform like Zoom or Skype. He has several of the published campaigns, but I’ve done a few of them. So, we might do the one he has written for his friends. We could even buy a completely new published campaign, but we would need to give him time to read through it.

“I’m looking for 4 or 5 adults who want to start a regular remote (via Teleconferencing) Dungeons & Dragons campaign.“